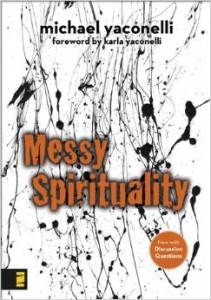 I flew home from a week-long business trip that started in Kansas City and ended in Miami. It was a long week, and I was tired (No excuse!). So as the plane was taxiing to the run way I pulled out a book to sit back and read (“Messy Spirituality” – good book). Just as I started to read the guy next to me asked the first of his questions: ” Hey, we were just on a cruise and they gave us a small book like that. Is it the same one?”… and then, “Is it good?” … “Where are you from?”... I answered each question politely, and he kept going until his wife finally said “Hon, I think he actually wants to read his book.” So the conversation ended.

I used to think that some sadistic, penny-pinching, profit-mongering person designed airplanes with one goal in mind: to stuff as many of us in as possible to maximize profits. However, maybe it was God who designed the seats to be so close that we are forced, literally and figuratively, to rub elbows with our neighbors.

And that’s where I messed up. I didn’t engage.

But later in the flight he engaged me again about my book, and this time the conversation went on. In fact we talked for about two hours! Randy and Lisa were returning from a ‘marriage’ cruise, hosted by Family Life, an organization they were involved with through their church. I learned a lot about their organization, and I had the chance to tell them about Easter Lutheran and our new partnership with Treehouse. We shared quite a bit, including bits about our kids and families. I really enjoyed getting to know them, and invited them to the upcoming Treehouse banquet (I hope they can come). I plan to stay engaged with them, as we have a lot in common.

Engagement. That is how Jesus ministered. His whole ministry was about engaging people where ever He met them: fishing, at a well, at a dinner or wedding, or when He was walking along a road. And I’ll bet He would never turn down the chance to engage someone sitting next to Him on an airplane.

Yep, I messed up yet again. But I am determined to get it right. I can’t be a Christian if I don’t try to follow His example. “Come follow me” (Matthew 4:19) was meant for more than Peter and Andrew…He was talking to us.

So, who can you engage?

Easter Lutheran’s Vision Board member Chris Cairo wrote the above reflection as part of his special ministry to college students, in which he writes to them on a monthly basis to keep their faith thriving in their daily lives on campus.

2 thoughts on “God designed airplanes and I messed it up”